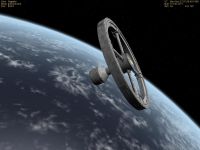 Space Station V in the early stages of its assembly 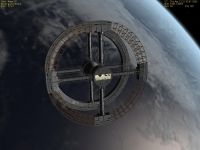 Space Station V as depicted in the film 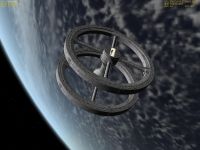 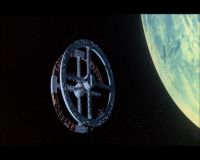 Space Station V from the movie for comparison

Space Station V is a space station from the World of 2001. It is a large, international, wheel-shaped space station used as a transfer point from low Earth orbit to the moon and other planets. It also functions as an orbital hotel. Rotation of the station provides artificial gravity for people aboard the station. The station contains two docking bays for docking spacecraft, placed on its rotational axis at the opposite sides of the construction. By the time of events depicted in the film it is still under construction; a second wheel section is being added.

Docking is accomplished by getting on centerline and flying nose-first into the docking bay. Match rotations once close. Orions and Titovs and the Aries-Ib come with a “virtual” docking port that doesn't really mate to anything physical, but rather provides good guidance for DockMFD to guide you into the bay. There, docking cradles and arms (shown, but not animated for this release) will snug your spacecraft into place. Your spacecraft might be moved to one side or the other to free up the centerline bay for docking/undocking. In any case, a boarding access arm will move into position over the side hatch. Seems cumbersome, but it works. Station V is not a focus-enabled object. For the v3.1 release, the side docking ports are usable. You must dock at the centerline port as always; once there, your vessel will be shifted to the first available side port, to free up the centerline port for someone else to dock. If there is no available side port, you'll stay on the centerline, blocking everyone else. So hurry up and unload! To undock from a side port, just undock the forward port. You'll be shifted to the centerline port, where you can repeat the request and leave. If the centerline port is taken, you're stuck. Small craft (pods and Moonbuses) are shifted instead to one of the four small docking ports at the periphery of the bay, staying out of the way of the bigger traffic.