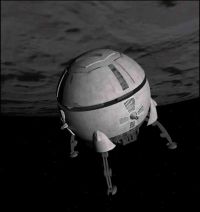 An Aries Ib in circumlunar orbit 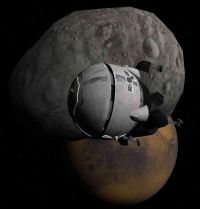 A "real" Aries Ib depicted in the movie

The Aries is a Lunar/Mars lander from the World of 2001, and one of a few vessels being presented in the film 2001 A Space Odyssey.

In general Aries has a few specified versions:

Aries Ib – Nuclear-powered lunar lander. The development of nuclear engines was first adapted to highspeed passenger transport to the moon.

Aries IIb – Like the Ib, but adds an Aeroshell for Mars landings. Also replaces some LH2 with LOX tankage for LANTR (LOX-Augmented Nuclear Thermal Rocket) application. To boost takeoff thrust and allow liftoffs from Mars, LOX is added in the nozzle of the nuclear engine as a sort of afterburner.

These versions were built to use small, mass-produced nuclear rocket engines. Using Particle Bed Reactor technology and using all the tricks learned from the early missions to Mars, the Aries engines achieve superb efficiency at the cost of lower thrust than their chemical-engine counterparts.