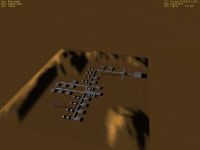 Port Lowell is a Mars base from the World of 2001

Described in Arthur C Clarke’s The Lost Worlds of 2001 Port Lowell is the largest human settlement on the red planet. The base takes its name from Percival Lowell who did so much to popularise early twentieth century interest in Mars. Dave Bowman is headed for Port Lowell in The Lost Worlds of 2001 before being recalled to command the Discovery. The design for Port Lowell is loosely derived from a concept shown in Dr. Robert Zubrin’s book, The Case For Mars. Port Lowell has been substantially reworked for this release of World of 2001, and now features wider surrounding scenery and specular reflections.