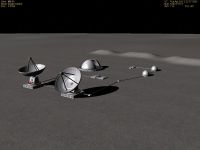 The Lunar Observatory is a lunar base from the World of 2001, located in Planck Crater on the moon’s far side, is essentially Clarke’s Tchalinko. In the novel Heywood Floyd runs into a Russian astronomer on Space Station 1 who had been "building up the giant radio observatory on the far side of the Moon". It’s probable Clarke imagined a single-dish radio telescope built like the famous Arecibo Observatory in Puerto Rico, however this "giant" design makes for suitably fun lunar operations! The Lunar Observatory is an international scientific facility. A surrounding surface mesh and specular reflections have been added to the Lunar Observatory for World of 2001 3.1.