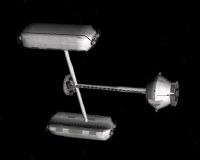 The Bondarenko is a vessel from the World of 2001. It is Soviet so-called "self-deploying space station" used to aid in space operation, based on Komarov components.

The Bondarenko self-deploying space station can move, but only on the lowest-energy trajectories (slowly). Bondarenko was in lunar orbit during the Tchalinko buildup; it's currently in GEO to aid operations there. Bondarenko was designed for deployment to Mars, but this has not been done as the Phobos base makes the Bondarenko's facilities redundant. Only one example of this ship exists.