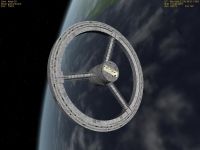 It is a predecessor to the larger and more famous Space Station V. It is built in similar conception as a rotating wheel shaped space station, with two docking bays placed on its rotational axis at the opposite sides of the construction.

Docking is accomplished by getting on centerline and flying nose-first into the docking bay. Match rotations once close. Orions and Titovs and the Aries-Ib come with a “virtual” docking port that doesn't really mate to anything physical, but rather provides good guidance for DockMFD to guide you into the bay. There, docking cradles and arms (shown, but not animated for this release) will snug your spacecraft into place. Your spacecraft might be moved to one side or the other to free up the centerline bay for docking/undocking. In any case, a boarding access arm will move into position over the side hatch.