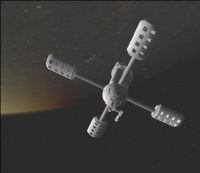 This small station is in polar orbit. This is done mostly to facilitate use by the high-latitude bases on European territory. An older base, Station Three is based on Aries components. An integral fuel capacity allows the support of the occasional moon run to Serenitatis Base, twice a month when the alignment is right