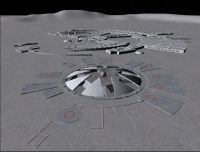 Clavius Base is a lunar base from the World of 2001

Clavius Base is the largest outpost on the moon, built by the United States Astronautics Agency (or the U S Astronautical Engineering Corps in the novel). The base became fully operational in 1994. The primary landing pad at Clavius is shielded by a dome-structure, as depicted in the film. In World of 2001, the dome has been animated by Wolfgang Schwarz (Nautilus). To open or close the dome simply select it [F3] and press [K]. An additional three pads have been placed around the base’s periphery for Moonbus operations. Clavius’ surrounding scenery has been expanded since the release of World of 2001 3.0, though this scenery remains fictionalised and is not an attempt at modelling Clavius crater (the crater rim itself is beyond the horizon on all sides). The position of the base remains unchanged so approaching from a typical retrograde lunar orbit will take you over the base as depicted in the film.