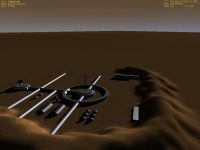 Korolevgrad, named after the great Russian rocket engineer and designer, S.P. Korolev, is the Soviet Union's foothold on Mars. Though slightly smaller than Port Lowell, the Soviet base features a unique architecture and structures built into the hills which surround it. Like the newly reworked Port Lowell, Korolevgrad features a large hangar to shelter spacecraft during Martian planetary dust storms.

Korolevgrad appears only after MJD 52215.