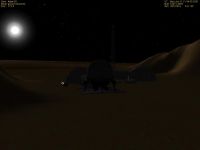 Prime Base is a Mercury base from the World of 2001

Prime base also appears in The Lost Worlds of 2001. When the soon-to-be crew of the Discovery are recalled from their assignments Dave Bowman is at Phobos, Victor Kaminski is orbiting Venus on Cytherean Station One and Peter Whitehead is at Prime Base on Mercury. Clarke describes the silverplated domes of Prime base, and originally conceived of locating the base at a permanent night terminator, which we now know does not exist! Indeed, in Orbiter you can watch the sun rise and set over prime base, and it can be quite spectacular!