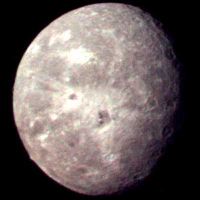 Oberon is the second largest and second most massive natural satellite of Uranus. It was discovered on 11 January 1787 by William Herschel, and was named after a character from William Shakespeare's A Midsummer Night's Dream. It is one of the five satellites of Uranus discovered prior to the Voyager 2 encounter of January 1986.

Oberon's orbit about Uranus is almost perfectly circular and equatorial, and has a radius of 583400km. Its orbital period is 13.463 days. This is the outermost of the five major satellites.

Like all the satellites of Uranus, Oberon's axis is tilted 98° relative to the ecliptic plane. It is locked in synchronous rotation, like the Earth's moon. When Voyager flew past, Uranus and all its satellites were near their southern summer solstice, and in this case it means that only the southern hemispheres were visible. As a consequence, only the southern hemisphere of Oberon has been mapped in any detail.

Oberon has a mean density of about 1.6 times that of water. From this, we can conclude that the satellite is mostly water ice, with a little bit of rock mixed in.

Oberon is a satellite included in the Orbiter base installation. It has no bases on its surface.