The Map Program is a general display used for monitoring the ship‘s course and predicting an approach to target planets. It allows the user to view entire solar system as well a single target. The map program uses planet to planet calculated trajectories. The trajectory is no longer limited to ellipses and hyperbolas now; it can be displayed over multiple references regardless the distance or influence the reference causes. The user has the ability to control the speed and accuracy of the trajectory engine. The modifications can be made from the configuration page. All modes will provide a great accuracy for interplanetary missions. Update rates as high as over ten times per second can be achieved without a significant system load with an average home computer.

The core uses the Encke-Fehlberg methods which allow a high speed trajectory prediction. In this version of the trajectory engine the graphical steps and the numerical integration steps go side by side. So, increasing a step size will lower the graphics quality. It would be possible to use a high order integration method with a long time step to compute the trajectory, and use sub-integrations to increase the graphics quality. That would be more complicated and it would not significantly increase the overall performance. So, a lower order method with a lower step size has been chosen as a default option. However, the user can select the integration method from Third order RK3, RK4-Gill, Symplectic 4th Order and RK-Fehlberg methods. Also the Adams-Multton method is under consideration. Of course, it is possible to create a much faster trajectory predictor but it is questionable that it does not provide a satisfying reward vs. effort ration. Surely, in the integrations where graphical plotting is not required, such methods could be used more easily.

You can center the display around a desired celestial body by pressing [Cnt] button. Then, you can type the name of the object you wish to center. The display will move to center on the object‘s current position. If you wish the center the display in a future position it can be done but only for positions and times of periapis passages. You can center the reference planet of the periapis by writing ―r-‖ in a front of the name,such as ―r-Mars‖, or the command ―p-planetname‖, which will center the display on the point (in the future) of your closest passage around that planet. Centering a particular periapsis will automatically bring up the text description for that periapsis (normally you would have to use the [SEL] button to scroll through periapsises to find the one that you want).

There can be multiple periapses on a trajectory. The number of available periapses and the currently selected periapis are shown in the top-left corner such as ―Pe 1 of 2‖. ―Ref Moon‖ is indicating that the Moon is the reference of this periapis. Only the selected periapis is shown on the display. Also there are two different kinds of periapis points, strong and weak ones. This simply means that the strong periapises are located inside the SOI (Sphere of influence). The weak periapises are located outside the SOI and most likely there isn‘t a stable orbit in that position. So, that could be considered to be the position where the ship will by pass the planet at minimum range. The strong or weak periapsis will be displayed for reference and target planets only. If the trajectory goes several orbit periods around the reference planet up to six periapsises/apoapsises can be displayed, but only if ‖One Pe/Ref‖ option is disabled from the configuration page.

The projected course of the spacecraft will appear in bright green by default, and will appear in purple when using flight planning mode. The flight planning mode will generate a hypothetical trajectory based on the information created by some other program. The bright white dot is the spacecraft itself. The green/purple dot on a trajectory is the periapsis, the closest position to some object. The orange circle is the target orbit. Sometimes the target is not visible on the screen. The boxes on a trajectory line are the nodes. The line of nodes (dotted line) will be drawn between the nodes and the reference planet. That is the position where ship‘s orbital plane and target orbit intersects. This is also the position for a plane change maneuver. Due to the numerical computations, the calculations may cause some weird effects on the node positions. Usually they are located at opposite sides of the reference planet. The information on the screen is displayed for the periapis positions, NOT for the current position of the ship. The one exception is when no single periapis is available, and the current position of the ship is used.

What is included in Map

All planets included in computations have the following characteristics: a mass greater than 1e20 kilograms (this number can be altered via the configuration page in the Map Program—hit [MOD] until it comes up) and they must orbit the same reference planet as the ship, or orbit the Sun. In addition, any planet, ship or station that is selected as a reference or a target is also included. Moons that have a different reference than the spacecraft are not included in trajectory calculations.

This mode allows you to use the numerical multibody predictor to generate the hypothetical transfer orbit based on the information generated by other programs. When this mode is activated the ―Plan‖ text and the name of the program generating the plan will appear in a title. Also, the trajectory will be displayed in purple (in a default configuration, of course). Whenever the burn information is present a hypothetical trajectory can be generated. This mode is especially great when planning free-return trajectories and returning from the Moon.

You can select the projection plane by pressing [Prj] button. Because the space is three dimensional, displaying it in a two dimensional display will cause some graphical problems. Therefore, choose the proper projection. Options are Self (your orbit), Ecliptic (ecliptic of the reference planet), target (the target‘s orbit is used as the projection), periapsis, and HTO (your hypothetical orbit).

The Map program includes non-spherical gravity in its predictions. Currently only J2 coefficients are used and this will be included only when the ship is within the sphere of influence. This feature is controlled automatically. However, it can be manually overridden from the IMFD.cfg by setting the option NonSpherical 0 it can be forced to be always active with NonSpherical 2.

Some basic configurations required by multi-body predictor can be made from the configuration page. In the top edge there is an indicator telling an amount of integration steps used in the prediction. Also, it will tell how many planets are currently included in the computations. For example, "3+5 of 62" indicates that there is three objects fully being used in the calculation and five objects that are using an analytical update out of a total of 62 objects. 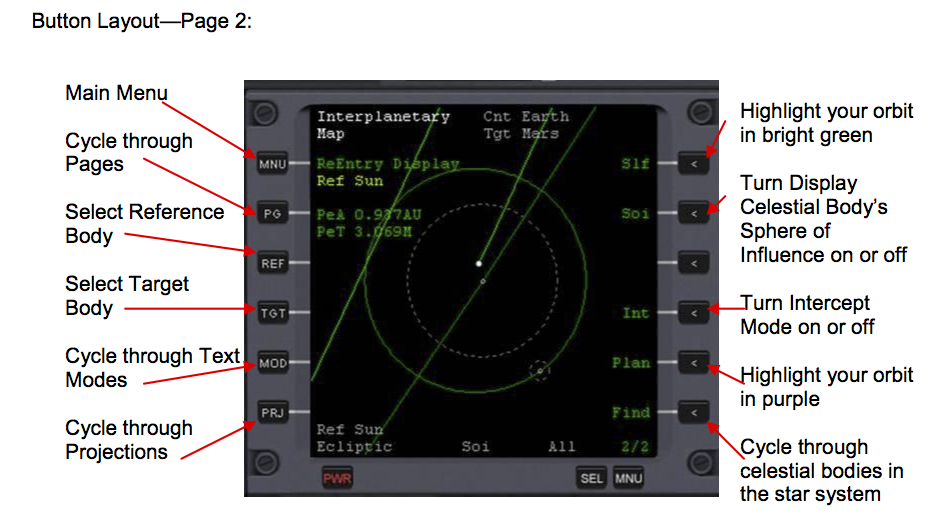 Clicking this button brings up the main menu screen of IMFD.

Switches the right hand side between two sets of buttons.

Allows the user to set up the reference body.

Cycle through text modes. There are 3 text modes, plus the map configuration page.

Zoom in on the object that is currently centered.

Zoom out on the object that is currently centered.

Automatically zooms so that all items listed in the DSP description are centered and fit nicely into the display. SLF — Self Orbit

When on, all bodies displayed have a dotted line around them indicating the boundary of their sphere of influence. When off, no such lines are displayed.

Turn Intercept Mode on or off.

Cycles through all bodies in the star system displayed, highlighting their orbits in yellow as they are selected.

The Map Configuration Page controls how the Map Program runs. To access the configuration page, hit the MOD button until it appears. It is probably best to leave these configurations in their default values unless you must absolutely change them. The only exception to this rule is Accuracy, which must be changed on occasion, such as when you are doing a direct reentry from the moon and you need a perigee prediction with an accuracy of within 2 km at a distance of 250,000 km from Earth, or Mass Limit if you want to use more bodies in the calculation. 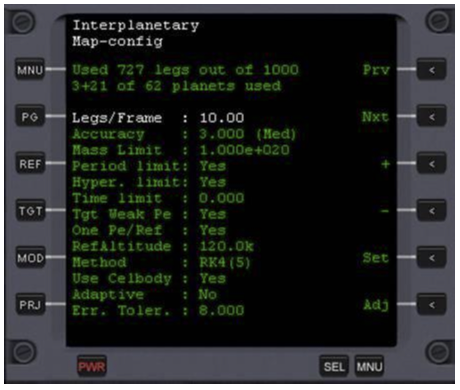 Legs/Frame — Number of trajectory legs computed in every time step.

MassLimit — The Map Program will ignore all objects with a mass less than this. Exceptions to this are, of course, your spacecraft.

TimeLimit — Calculate trajectory a specified amount of seconds. This setting will override all other limiters. (0=Disabled)

Tgt WeakPe — Displays flybys even if the periapis is outside a sphere of influence.

One Pe/Ref — When on, the Map Program will display only one periapis passage (the closest one) even if the trajectory will pass by the object multiple times. If disabled, periapis data is recorded for every periapis passage. RefAltitude—Altitude of entry interface.

Adaptive — Experimental parameter, must be left in default setting.

Err. Toler — Experimental parameter, must be left in default setting.

There can be multiple periapsises or even an apoapsis in your trajectory. Text information may vary for these cases. For example, in an Earth to Mars transfer, you will have your periapsis at Mars, your periapsis your solar orbit, and your apoapsis of your solar orbit. You can cycle through these periapsises or apoapsises via the SEL button, and you can cycle through text modes via the MOD button. Below are all abbreviations you will encounter in the Map Program:

Display Close to a Planet

Here is what the display looks like close to a planet. Here, we are about 3 hours out of Earth Ejection. 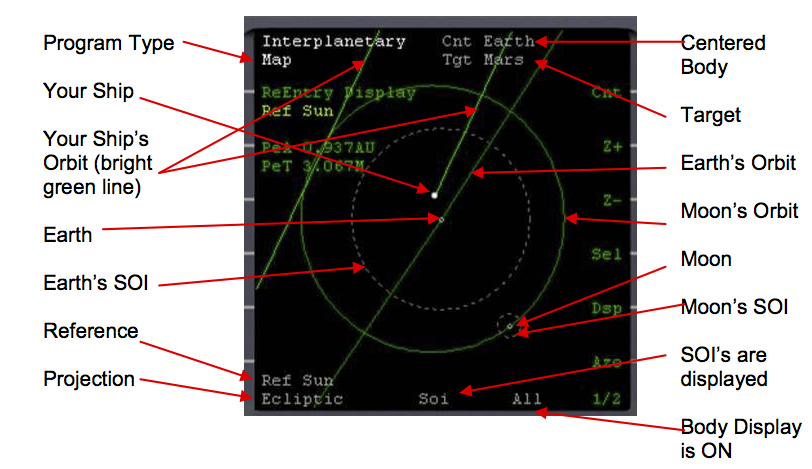 Note—Your ship‘s orbit is broken. The line to the left shows your orbit in one solar orbit from where you are now. It is broken because Mars‘s gravity when you pass it (if you don‘t do an insertion burn and just come right back to where you started) distorts your orbit slightly. Note, you will be near where you started if you do this, but Earth will not be there!!! Also note how the ship is inside Earth‘s SOI in the figure above.

Display far from a Planet

Map display with Body Display OFF: 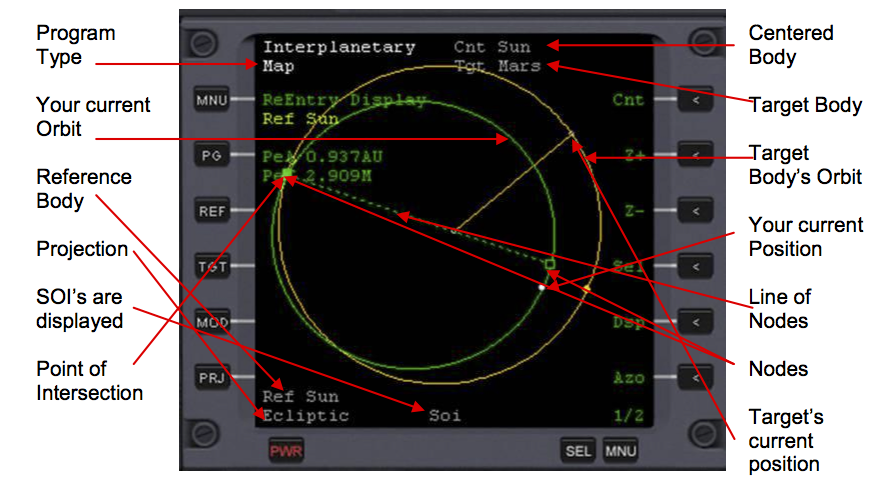 Map display with Body Display ON:

All objects in the display described on the previous page are the exact same. Hitting Dsp turns on all other bodies and their orbits. The bodies‘ orbits are in dull green, while their current positions are displayed by little grey circles. 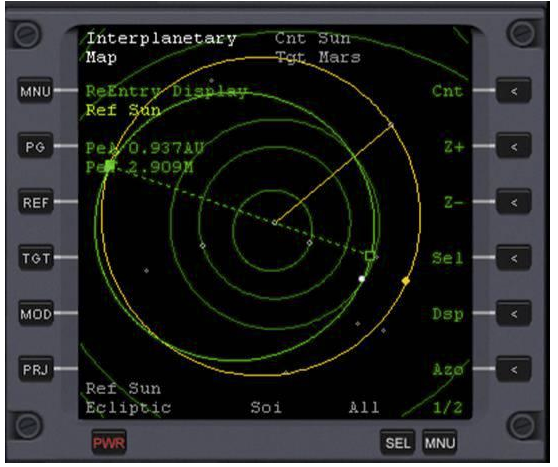 In the below figure we are closing in on our Target, Mars. The Intercept Line (white dotted line) leads to the point of intercept. Note that the periapsis at the target planet MUST be centered in order for Intercept Mode to work. 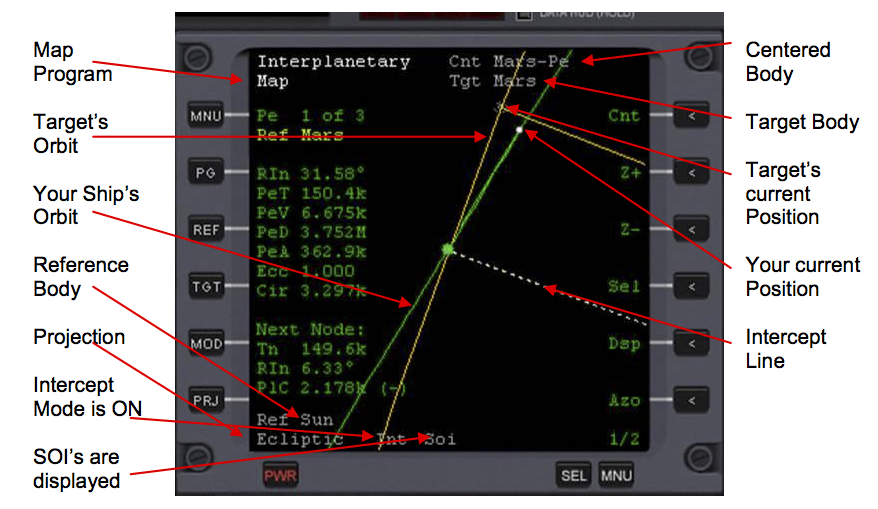 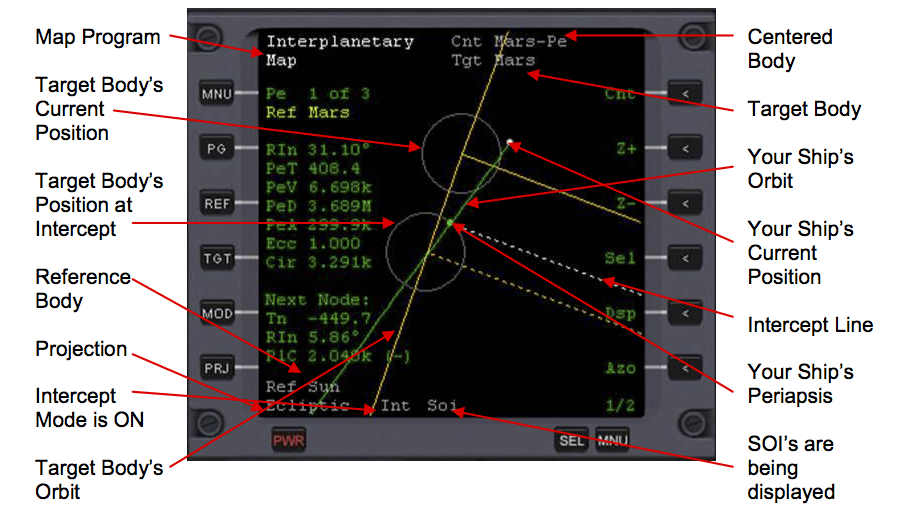