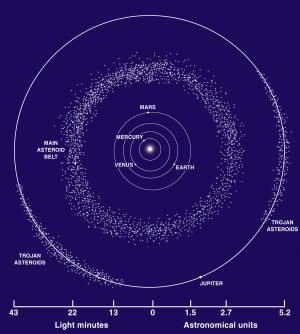 Image of the main asteroid belt between the orbits of Mars and Jupiter.

The asteroid belt is a region of the Solar System falling roughly between the planets Mars and Jupiter where the greatest concentration of asteroid orbits can be found.

It is termed the main belt when contrasted with other concentrations of minor planets, since these may also be termed asteroid belts. In this usage, it often refers only to the greatest concentration of bodies with semi-major axes between the 4:1 and 2:1 Kirkwood gaps at 2.06 and 3.27 AU, with eccentricities less than about 0.33, and with inclinations below about 20°. This region is marked in red in the diagrams below, and contains approximately 93.4% of all numbered minor planets.

The asteroid belt region of space also contains some main-belt comets which may have been the source of Earth's water see Article at spacedaily.com. 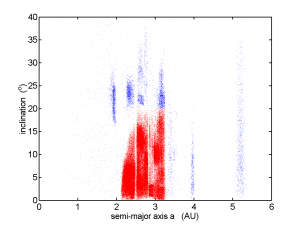 The asteroid belt (showing inclinations), with the main belt in red

A common theory agreed upon by most astronomers, called the nebular theory, is that during the first few million years of the solar system's history, planets formed by accretion of planetesimals. Repeated collisions led to the familiar rocky planets and to the gas giants. However, if the average velocity of the collisions is too high, the shattering of planetesimals dominates over accretion, and planet-sized bodies cannot form. The region lying between the orbits of Mars and Jupiter contains many strong orbital resonances with Jupiter, and planetesimals in this region were (and continue to be) kicked around too strongly to form a planet. The planetesimals instead continue to orbit the Sun as before. The inner border of the main belt is determined by the 4:1 orbital resonance with Jupiter at 2.06 AU which sends any bodies straying there onto unstable orbits. Most bodies formed interior of this gap were swept up by Mars (which has an aphelion out at 1.67 AU) or ejected by its gravitational perturbations in the early history of the Solar System.

In this sense the asteroid belt can be considered a relic of the primitive Solar System, but it has been affected by many processes active in later periods, such as internal heating, impact melting, and space weathering. Hence, the asteroids themselves are not particularly pristine. Instead, the objects in the outer Kuiper belt are believed to have experienced much less change since the solar system's formation.

An old theory that is much less favoured these days was that the asteroids in the asteroid belt are the remnants of a destroyed planet. 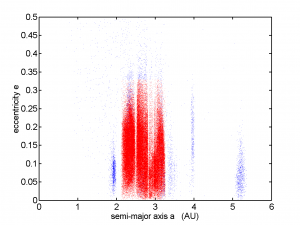 The asteroid belt (showing eccentricities), with the main belt in red

[[Image:Kirkwood Gaps.png|250px|thumb|Distribution of asteroid semi-major axes in the vicinity of the main belt. Cyan arrows point to the Kirkwood gaps, where orbital resonances with Jupiter destabilize orbits.

Despite popular imagery, the asteroid belt is mostly empty. The asteroids are spread over such a large volume that it would be highly improbable to reach an asteroid without aiming carefully.

Nonetheless, tens of thousands of asteroids are currently known, and estimates of the total number range in the millions. About 220 of them are larger than 100 km. The biggest asteroid belt member is Ceres, which is about 1000 km across. The total mass of the Asteroid belt is estimated to be 3.0-3.6x1021 kilograms, which is 4% of the Earth's Moon. And of that total mass, one-third is accounted for by Ceres alone.

The high population makes for a very active environment, where collisions between asteroids occur very often (in astronomical terms). A collision may fragment an asteroid in numerous small pieces (leading to the formation of a new asteroid family), or may glue two asteroids together if it occurs at low relative speeds. After five billion years, the current Asteroid belt population bears little resemblance to the original one.

Asteroid belts are a staple of science fiction stories less concerned with realism than with drama, since they are frequently portrayed as being so dense that adventurous measures must be taken to avoid an impact. The best-known example is probably the Hoth system in Star Wars: The Empire Strikes Back. Protoplanets in the process of formation and planetary rings may look like that, but asteroid belts do not. In reality, the asteroids are spread over such a high volume that it would be highly improbable even to pass close to a random asteroid. For example, the numerous space probes sent to the outer solar system, just across the main asteroid belt, have never had any problems, and asteroid rendezvous missions have elaborate targeting procedures.

The inaccurate image of an overcrowded Asteroid Belt is especially frequent in science fiction films, apparently because it makes for dramatic visual images which the true nearly empty space does not provide. (The movie 2001: A Space Odyssey is unusual in that it does portray realistically the ship's "encounter" with a lone asteroid pair).

On the other hand, written depictions of human encounters with asteroids, their mining and their colonization - an increasingly frequent SF theme since the late 1940s - are more often scientifically accurate.

The asteroid belt in fiction and film[edit]

Belts of dust or debris have also been detected around stars other than the Sun, including the following:

The orbital distance of the belt is an estimated mean distance or range, based either on direct measurement from imaging or derived from the temperature of the belt. The Earth has an average distance from the Sun of 1 AU.