This program can be used to launch into a lunar transfer orbit or any other parking orbit for an interplanetary flight generated by the Course, Base Approach or Sling-shot programs. Operation mode must be selected to correspond with your current plan. When using lunar transfer mode the target must be defined. Also, you must define the date of lunar orbit insertion. This parameter is not available when you are not using the lunar transfer mode. The (Time) item in the launch conditions display counts down the optimum launch time. Every planet rotation, there are two launch opportunities, some slightly better than the others, but pretty much equal (feel free to launch whenever the Time reaches zero). You can launch any time you want to in a heading pointed by (Hed), but the launch conditions may not be at their best and you may end up with a high EIn.

During the ascent, the ship should be moving towards this heading (Hed). Keep the Surface Launch Program open the entire time, and introduce side slip to keep the EIn at its minimum. The target is more like a point rather than a plane. So, don‘t worry—if EIn is not perfectly zero, later course corrections are possible. It is very similar to heading towards a VOR beacon with an airplane. (EIn) presents deviation from the target point. This number should be as close to zero as possible, but not during the first few minutes when launching in some other direction than that displayed in the Hed item. For example, if you are launching from Cape Canaveral at a heading of 330 degrees, and Hed is 90, don‘t worry about EIn being very high as you are rolling down the runway, but once you turn towards 90 degrees and begin to pick up speed, you should start watching EIn. Don‘t add side slip if it is decreasing, wait until it has hit a minimum and started increasing, THEN add side slip. You should be able to control the liftoff so that the (EIn) is zero at MECO (if you launch when the time item on the Surface Launch Program says zero, EIn will be very close to zero if you perform a nominal ascent). It shouldn‘t be very difficult to do.

Under most circumstances, the best launch heading would be ‖090‖ because the launch would be in a rotation direction of the planet and you can use the rotation velocity to assist, but that is not always the case. Launching in any other direction would be a little more difficult because of the planet rotation must be compensated during the launch and it will consume more fuel. The launch latitude should be as close to equator as possible. (BLL) shows optimal launch latitude but you don‘t have to launch from there. Optimal launch heading (Hed) is displayed launch conditions display. Launch into this heading should take a place when the (Time) is zero. (RIn) displays the transfer orbit inclination relative to target orbit. The launch conditions display will disappear after takeoff or launch. The realtime flight data display remains.

Note that on Page 2 (brought up when you hit MOD—and not shown here), only Z+ and Z- work (BV and Autoburn do nothing). 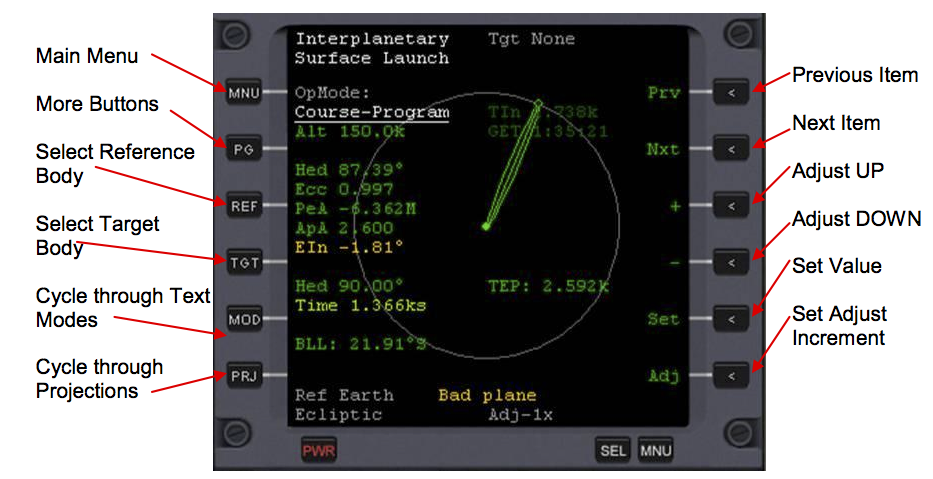 The orbit display (the picture) is almost identical to Orbit MFD. Once you launch, Hed, Time, BLL, and TEP disappear. Text Items are described below:

This is where the Surface Launch program gets its information. Options are Course-Program, BaseApproach, Slingshot, Higher-Orbit, Lower-Orbit, and Lunar Off-Plane. Lunar Off-Plane is useful for launches to LEO before going to the moon. If you want to get data from another MFD, you will have to use the shared mode.

This is the altitude of the parking orbit.

This is the heading that you should fly if you were to take off right now.

This is your current eccentricity.

Your current Altitude of Periapsis.

Your current Altitude of Apoapsis.

The heading you should fly when you launch for orbit.

Time in seconds until your optimum launch time.

The optimum Latitude that you should launch at. It does not matter if you are not at this latitude, however, you should be as close to the equator as possible.

This is displayed if your Ejection Inclination is greater than one degree.