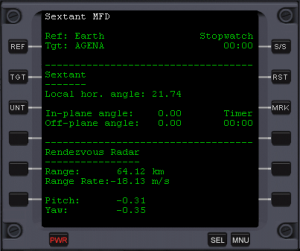 Sextant MFD is an MFD that simulates a sextant and rendezvous radar for use in semi-optical orbital rendezvous. The intent is to simulate the environment presented to the pilots of Gemini-era spacecraft in the event of a flight computer failure. For more information on the technique refer to the thread on the Orbiter-Forum and Sam Enkidu's tutorial on Orbit-Hangar.

A beta version of the MFD is available on BitBucket.

Load the MFD by pressing the MFD "SEL" button and selecting "Sextant".

The display is broken into three distinct parts.

The upper section of the display shows reference information including the MFD title, the current reference body (used for determining the local horizon), the current target and a stopwatch.

The middle section displays information about the target based on measurements from a virtual sextant.

The units for all angles are decimal degrees.

The lower section displays information about the target based on measurements from a virtual rendezvous radar.

The function of each of the buttons is described below.

Switch between metric and imperial units.

Stop and reset the stopwatch.

Take a mark on the target, reset the timer to zero and start it counting. Press again to take another mark and halt the timer.

When you change vessel focus, the MFD will remember the settings for each vessel and MFD position. This includes sextant mark information, so that a mark may be started, focus switched, and the mark completed after switching back.

This MFD saves its state to the scenario file so all settings will be restored when restarting the scenario. Also included is saving/restoring the settings for any other vessels that have been used with Sextant MFD in the scenario even though those vessels do not have the focus at the time of scenario being saved.

The following items can be configured.

SEXTANT_MAX_ANGLE - the maximum angular measurement range of the sextant, in degrees.

RADAR_MAX_RANGE - the maximum range of the radar, in metres.

RADAR_MAX_ANGLE - the maximum angular range of the radar, in degrees.

This MFD uses the built-in Orbiter pop-up menus for selecting the reference body. Thanks to CJ Plooy for his work in making this functionality available.

Two functions from FreeOrbitMFD by CJ Plooy were used for formatting the SI prefixes. See source code for details.

Sextant MFD is free software: you can redistribute it and/or modify it under the terms of the GNU Lesser General Public License as published by the Free Software Foundation, either version 3 of the License, or (at your option) any later version.

Sextant MFD is distributed in the hope that it will be useful, but WITHOUT ANY WARRANTY; without even the implied warranty of MERCHANTABILITY or FITNESS FOR A PARTICULAR PURPOSE. See the GNU Lesser General Public License for more details.

You should have received a copy of the GNU Lesser General Public License along with Sextant MFD. If not, see <http://www.gnu.org/licenses/>.