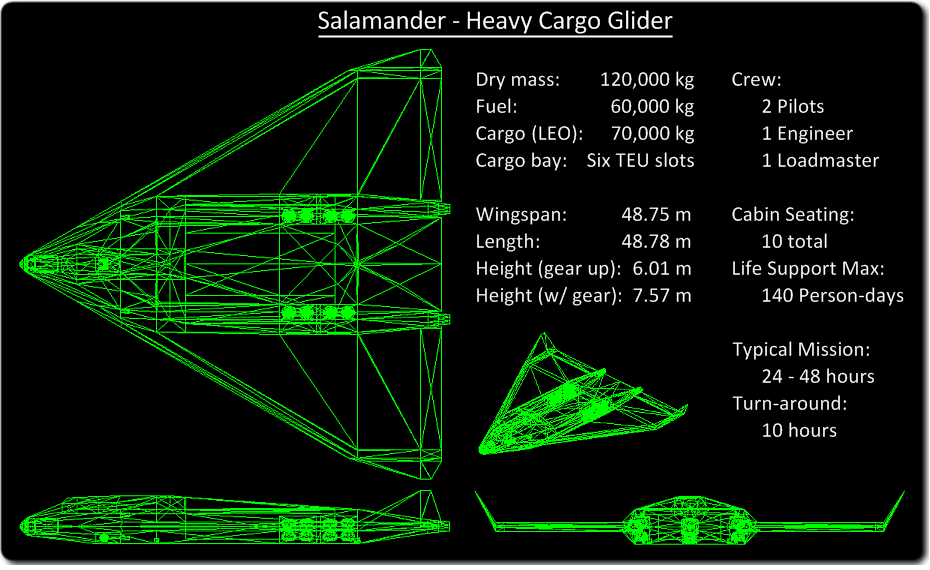 The Salamander is a near-future realistic heavy-lift glider first flow in the 2030's. It is a part of the Manifest Destiny universe and serves as the primary method of transportation. The primary mission of the Salamander is launching cargo from Earth to Low Earth Orbit and returning cargo back to Earth. The vessel is well suited to Earth's atmosphere due to the very large wing area and streamlined profile. It has a very low wing loading of 38 lbs/ft^2 (187 kg/m^2), allowing it to glide for an extremely long time with very stable aerodynamic properties. (Compare to the Space Shuttle's approximate wing loading of 110 lbs/ft^2.)

The cargo bay is designed to hold up to six TEU units.

The Salamander is equipped with an Antimatter Thermal Powerplant, used for both power generation and propulsion. A miniscule amount of antimatter (AM) is stored using magnetic confinement in the engine compartment. For propulsion, every second a few nanograms of antimatter and several kg of liquid reaction mass are injected into the combustion chambers. The typical reaction mass is purified water. An AM reaction immediately increases the temperature and pressure of the reaction mass, causing it to expel out of the nozzles.

Electricity for the magnetic confinement and for general spacecraft use is produced using a similar process at much lower energy levels.

The Salamander was designed and built by a commercial group of companies, called the SPACE Consortium, as a response to the severe energy shortages of the 2020's. The SPACE member companies saw a significant opportunity for profit by transitioning to a space energy economy. In addition, the spin-offs of this commercial space race would be an order of magnitude more than the previous space race, further justifying the investment.