The HAC is cleary shown on the flight path of STS-117. 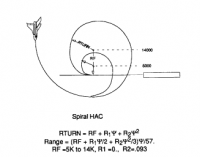 NASA definition of the spiral HAC used for the shuttle

A Heading Alignment Cone (HAC) is a virtual truncated cone, used to guide NASA's Space Shuttle onto the centerline of a runway for landing. Some publications also name it Heading Alignment Cylinder, but that is not the official NASA terminology. The radius of a HAC is about 18,000 feet in 22 NM altitude.

For alignment with the runway, the surface of the HAC is followed by the Shuttle orbiter until runway alignment is achieved, with the point, where the final glide path meets the HAC, being called Nominal Energy Point (NEP).