AMSO (Apollo Mission Simulator for Orbiter) is an add-on for Orbiter, created to reproduce the flights of the American Apollo Program, exploring the Moon from 1968 to 1972. The addon currently simulates missions from Apollo 8 to Apollo 17.

One of its greater qualities is the astonishing graphic made by Luis Teixeira, which allows the user to enjoy a complex meshing and texturing work without losing notably Frames Per Second; an example is the accurate Virtual Cockpit for both CSM and LM, for the moment unusable, but so accurate that gives a great immersion in phases of flight like docking and landing. For Docking manoeuvre a full-working and realistic Crewman Optical Alignment Sight (COAS) is provided on both CSM and LM. 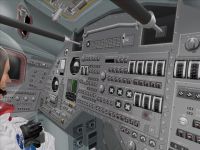 This deployment include the unfolding sequence to the Moon ground and then, a sequencial animation which mount all further equipments, onto it. This new LRV simulate thermal variations of the forward batteries pack and therefore, you will need to manage the dust protection covers of the batteries radiators mirrors.

Armstrong and Aldrin landed with Eagle in Mare Tranquillitatis, while Mike Collins was orbiting above them in CSM Columbia. The first foot was set on lunar surface by Neil Armstrong, pronouncing in the mean time the words:<<That's one small step for (a) man, one giant leap for mankind.>>

“The successful failure”; Lovell, Haise and Swigert used the LM Aquarius as a life-boat , when CSM Odyssey was shut down to prevent total loss of oxygen and electricity, on the way to the moon, due to an explosion in the SM. LM’s DPS engine was used to achieved a satisfactory free-return trajectory.