From OrbiterWiki
(Redirected from Patsayev)
Jump to navigation Jump to search 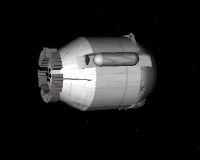 The Patsayev is a spacecraft from the World of 2001. It is a soviet tanker and cargo transport. There are two versions: normal for a work on Earth's orbit, and Patsayev-M which is Mars cargo transport.

Previously, before the Tchalinko base was able to process lunar ice into fuel, there was no refueling capability on the moon. The Patsayev tankers were used to shuttle fuel to the lunar surface and return empty. With fuel now available at Tchalinko, the Patsayevs are undergoing conversion into Komarovs, or are performing the Taurus mission of boosting payloads to high or escape orbit. Since the Patsayev has the fuel capacity of a Komarov transport but not the mass of the habitats, it is capable of far more delta-V than the Taurus to which it is sometimes compared.

The Patsayev-M is a Mars cargo vessel, which simply adds the Mars aerobrake section and a “luggage rack” to carry up to a dozen cargo containers externally. The Patsayev-M is the functional equivalent of the U.S. Herculis. It is quite different in operation, however, as it aerobrakes into Mars orbit. Normal procedure then is to land on Phobos or be unloaded in orbit. The Patsayev-M could probably land on Mars in theory, but never does in practice.

Splitting the eject burn into two or more burns[edit]

As the Patsayev class is a bit weak on acceleration, a single eject burn can often take painfully long. To avoid the problem, its common practice to split the eject burn into two smaller burns.