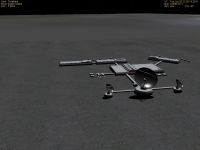 Tchalinko is a lunar base from the World of 2001

Tchalinko is the Soviet counterpart to Clavius base, located in Tsiolkovsky crater on the far side of the moon. Though Tchalinko does not feature in Arthur C Clarke’s writing it is mentioned in the film by the Russian scientists Heywood Floyd meets on Station V; as one states, ‘we’re on our way back from the moon. We’ve just spent three months calibrating the new antenna at Tchalinko’. A surrounding surface mesh and specular reflections have been added to Tchalinko for World of 2001 3.1.