Difference between revisions of "Saturn" 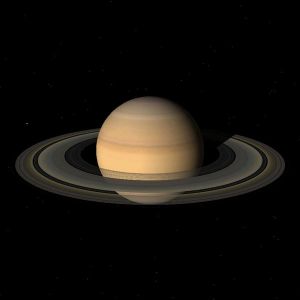 Inside Saturn is probably a core of iron, nickel, silicon and oxygen compounds, surrounded by a deep layer of metallic hydrogen, then a layer of liquid hydrogen and liquid helium and finally, an outer gaseous layer.

Saturn has 62 known moons orbiting the planet; 53 are officially named. Which means that 9 are waiting to be officially named.[9] The largest moon is Titan, which is larger in volume than the planet Mercury. Titan is the second-largest moon in the Solar System. The largest moon is Jupiter's moon, Ganymede. There is also a very large system of rings around Saturn. These rings are made of ice with smaller amounts of rocks and dust. Some people believe that the rings were caused from a moon impact or other event. Saturn is about 1,400,000,000 km (869,000,000 mi) from the Sun. Saturn takes 29.6 Earth years to revolve around the Sun.

Saturn was named after the Roman god Saturnus (called Kronos in Greek mythology). Saturn's symbol is ♄ which is the symbol of Saturnus' sickle.

Go to Addons for Saturn