Project Baikonur is a community effort for creating the biggest spaceport of the world as addon for orbiter.

Make use of landsat coverage to create surface tiles which can be used for the base. Tutorials for that task in conjunction with NASA Worldwind are available on orbithangar. 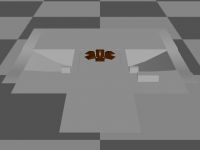 Overview of the proton pad in Anim8or 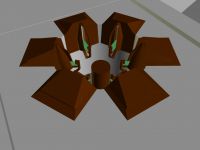 Close up of the holddown/umbilical arms