Difference between revisions of "Probe" 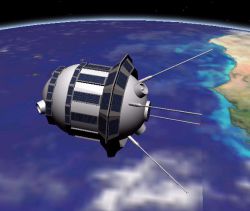 Probe (a Luna E3) in an unglamorous LEO

Dealer McDope created a series of Soviet-era meshes between 2002 and 2004 included in these was a basic, green, Luna E3 mesh. The Luna E3 was the first probe to photograph the far side of The Moon, launched atop an R7 booster.

When the CCCP Team, co-ordinating on OrbiterIRC, set about writing C++ code for McDope's meshes the generic test object of choice became the Luna E3. Sticking to the naming convention McDope adopted of simply calling it Probe, an in-joke cropped up by which whenever a developer conducted a flight test, cries of Hail Probe! would abound.

This in-joke gained popularity when a post to the old M6 off-topic forums introduced the concept of Hailing Probe to a wider audience with a thread titled The Cult of the Probe. So ensued the second longest-running thread in the old Forum's history. Without a single flame.

The Probe has been hailed a great number of times afterwards; one notable example is during the Winter holidays in the end of 2008 (http://orbiter-forum.com/showthread.php?t=5947).

Such was the following of the thread that it spanned two years and even spawned Probe Day (4th October -- the date of both Luna E3's launch, and two years earlier, that of Sputnik 1, the first artificial satellite).

Unfortunately, with the migration of the Orbiter forums to a new system in Februrary 2006, the thread was not ported.

Regardless, it is the obligation of orbiternauts across the world to hail the omniscient, omnipotent, and omnipresent probe. Hail probe!

A long time Orbiter fan and forum lurker has archived the thread in a .mht file and now needs to figure out how to restart the thread.

An acolyte of the Almighty Probe has discovered the possible birth of the Probox movement, along with several lost details, in an archived page of the original M6 forums. 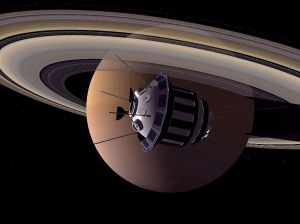 Probe (a Luna E3) on a fanciful Saturn flyby

the hailprobe smiley from Orbiter forum
Retrieved from "https://www.orbiterwiki.org/index.php?title=Probe&oldid=17040"
Categories: