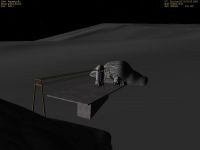 A small satellite base manned only when a spacecraft has arrived, Phobos Base is as close as Dave Bowman gets to Mars in The Lost Worlds of 2001. Before being recalled to command the Discovery, Bowman has the experimental Polaris 1-XE spacecraft "suspended by a network of flimsy cables that run between two peaks". The placement of touchdown points on the Polaris 1-XE allows you to simulate this. Note that the texture displayed on the "peaks" is the same as for Phobos itself, the base will load the stock Orbiter/Phobos texture or a hi-res one, so long as its called Phobos.dds.