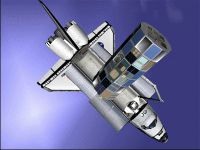 Deployed in orbit on April 7, 1984 by Shuttle Challenger and intended for retrieval after one year, the LDEF satellite was stranded in orbit for six years after the Challenger accident. The crew of STS-32 recovered the LDEF from its decaying orbit on January 11, 1990, two months before it would have re-entered the Earth's atmosphere and would have been destroyed.

The LDEF makes a good object for deployment and retrieval missions in Orbiter.