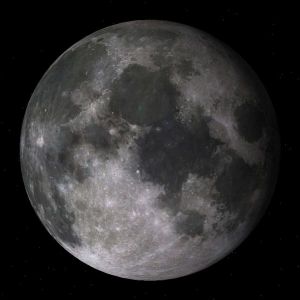 So you're in low Earth orbit, in a gassed up Delta-glider. From here you want get to the Moon above. Here's how.

First thing you need to do is line up (align) your orbital plane with the Moon's. Bring up the orbital alignment MFD on either screen (Shift+A). Then on that MFD, target (Shift+T) the Moon. This will bring up a display you probably don't understand. There is a circle with two lines on it, and some numbers, as well as a box that says 'kill thrust'.

The line that extends out from the center of the circle in only one direction is your position in your orbit. The longer line that bisects the circle is where your orbit intersects with the orbital plane you're aiming to align with. These are the regions where you want to change your orbital plane. The numbers along the left side of the display indicate how far your orbit is from being aligned with that of the target.

What you do is wait for your position in your orbit to get near one of the orbital intersections mentioned earlier. When this happens, the 'kill thrust' message will be replaced by a flashing 'thrust normal' or 'thrust antinormal'. Follow the directions - use your autopilot to orient your ship toward the normal or antinormal, and then start the engine. You'll notice the Rinc number on the left start to decrease. Your goal is to get this number as close to 0 as possible, because Rinc stands for Relative Inclination - the difference in degrees between your orbit and the target orbit. It may take several burns in different directions to line up. When Rinc is .05 or less you win.

So, you've gotten your orbit aligned - congratulations. You've just turned a 3D equation into a much simpler 2 dimensional one.

Now comes the fun part. Bring up the transfer MFD, either in the same screen, or the other one if you like. Target the moon as before. You'll see a circle representing the Moon's orbit, and text stating 'no intersect'. This is because your orbital path and the Moon's do not, in fact, intersect. Yet.

First thing to do is hit the HTO button. Once you've done this, you press and hold the DV+ button. This will cause a dashed oval to grow out of the point in the middle of the display. You want this dashed oval to just touch the circle of the moon's orbit. When it does, you'll get a whole bunch of new symbology. The yellow dashed line is where the moon will be when you get to the other end of the oval. The green dashed line is the point in your orbit where you should make your ejection burn (which will initiate the transfer), the solid yellow line is where the Moon is now in its orbit, and the grey line is where your proposed trajectory (the dashed oval) intersects with the Moon's orbit. What you should do is fiddle with the EJ+ and EJ- buttons to position this grey line over the dashed yellow one. Once you've done this, wait until the solid green line (your position in your orbit) is either at or close to the dashed green line. Using the Prograde autopilot mode, make a long burn, watching the transfer screen. A solid green oval representing your actual current orbit will grow out from the center of the circle, and eventually match the dashed proposed orbit. When it does, kill your engines.

Congratulations, you're on your way to the Moon. So, a couple days later...

You've arrived! The Moon is getting pretty big in the viewscreen. Really big. Too big in fact. Oh dear, we're about to impact the lunar surface at some 17,000 miles per hour. Now what?

Bring up the orbit display in one of your MFD's. Hit the ref (reference) button, and put in 'moon'. This brings up a display of your orbital path around the Moon. In your case, this probably looks like a straight green line (your path) intersecting the gray circle (the Moon). If so, switch the HUD to surface mode. Use the autopilot's prograde mode to point the engines. Fire all engines, and watch the orbit display. It should, ideally, turn into a hyperbola with a circle inside. You want to continue this burn until the green hyperbola is entirely outside the grey circle representing the Moon. Disaster averted!

There is one final problem. Continuing on this path will cause our ship to slingshot around the Moon and off into deep space somewhere. So the final operation in lunar orbit insertion is to slow down the spacecraft somewhere near the closest point to the Moon. Use the autopilot's retrograde mode. While watching the orbit MFD, wait until you reach the closest point and fire the engines. Your path will slowly turn into a smaller and smaller hyperbola until suddenly turning into an ellipse. If you continue the burn you can get the orbit to be close to a circle. All done? Congratulations, you're here!

This article has a precis and appears in the Random addon or Random article section on the Main Page. The precis can be found at LEO-lunar transfer/precis and is displayed below.