Difference between revisions of "Jarvis HLV" 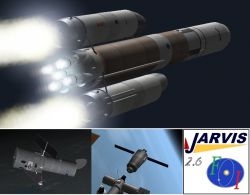 The Jarvis concept arose from a study by NASA in the mid 1980's to combine technology from both the Saturn V and STS to create a heavy lift launch vehicle. Although the Jarvis plans were never turned into hardware, the idea has carried on in the form of the Constellation launchers and the Space Launch System. Forum Orbiter Italia proceded to make a version for Orbiter, and it has become a popular launcher for medium to large payloads.

Jarvis comes in a variety of versions to suit specific needs, ranging from launching medium sized payloads into LEO, to launching large payloads to the Moon. The versions are: