You can easily change the orbit altitude or periapsis location with the planet approach program assuming that you are in an approach stage (Close to or inside the sphere of influence and approaching with a hyperbolic orbit). Also, the equatorial inclination can be adjusted. This is good when planning to approach a high inclination orbit. However, you might not be able to choose an inclination lower than your current inclination to the equator. Sometimes, to reach lower inclinations, abnormal plane change maneuvers must be executed in the ascending or descending node of the equator, but it‘s worth a try if you really want to. "Min EqI" and "Max EqI" display the bounds of inclination adjustment. Inclinations higher than -90 and lower than 90 degrees represent prograde orbits, and inclinations higher than 90 and lower than -90 degrees represent retrograde orbits. When the inclination is negative you will approach the planet from the South Pole, otherwise, you will approach the planet from the North Pole. The burn created by this program should be executed as far from the planet as possible. Sometimes it is possible to execute the burn as far as three times the sphere of influence. This will minimize the fuel usage. Smaller correction burn can be executed later if required. Note that the planet you are trying to reach MUST be the REFERENCE, NOT the target. Also, your vessel must be the source to make correction burns. In order to set your inclination with respect to the equator (probably what you want to be doing if you intend on landing), the target MUST be Equator. 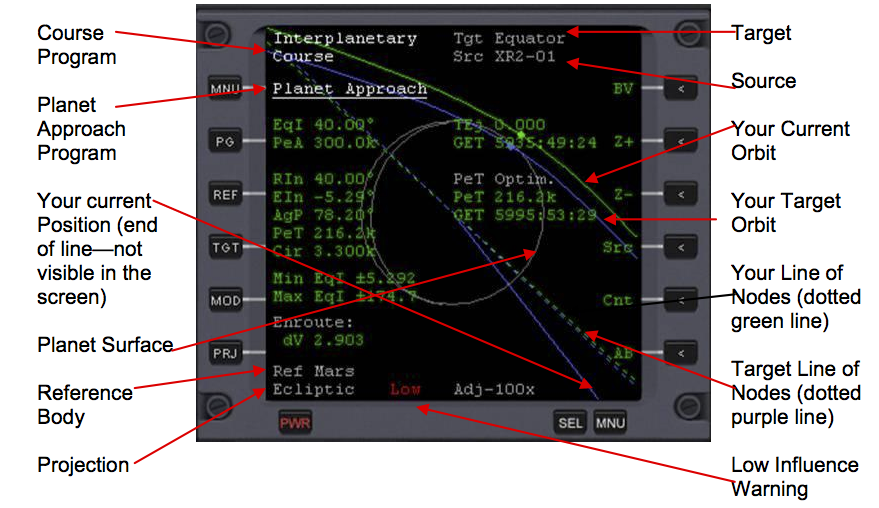 Inclination with respect to the Equator.

Altitude of your periapsis (closest approach) to the reference Planet.

Inclination relative to the target.

Ejection Inclination. This value is not very important.

The Argument of Periapsis of your target orbit. This is the angle between your periapsis and your ascending node.

Time to your periapsis (closest approach).

Minimum Equatorial Inclination possible given all of your current parameters.

Maximum Equatorial Inclination possible given all of your current parameters.

Delta Velocity required for your current orbit to match the target orbit. You can use Autoburn or the Burn Vector View to complete this burn.

*Note — The low influence warning will go away as you get closer to the planet. You can still complete autoburns even when under low influence. This is probably a better idea as it is more fuel efficient. Also, for the RIn item, Relative Inclination to the target, the target is the equator in the picture above, so you are inclined 40 degrees to the equator. Be careful though, as executing the burn too far from the planet will lead to inaccuracies. It is best not to execute the burn more than twice as far as the SOI.