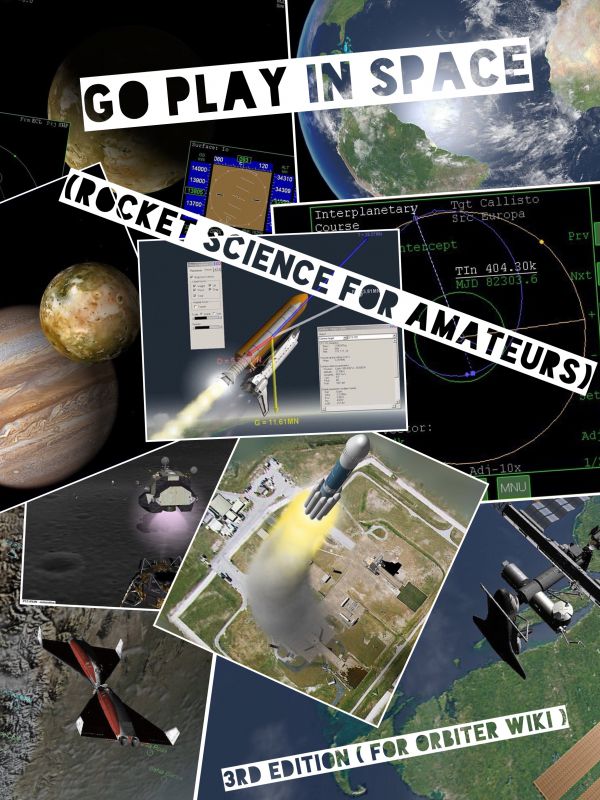 Probably the most useful introductory material for Orbiter is the book Go Play In Space, written by Bruce Irving with contributions by Andy McSorley and Mark Paton. The first edition was published in 2005, with reference to the 2005 version of Orbiter. The second edition was published in 2006, for the 2006 version. Work on the third edition was begun, to work with the 2010 version of Orbiter, but was not completed. Parts of that work are included here, including a new chapter on reentry, which was inserted after chapter 5. Bruce Irving has kindly granted permission to use the existing material from GPIS as a starting point for this section of RSFA. If you would like to see the second edition, the standard download location is http://www.aovi93.dsl.pipex.com/pdfs/GoPlayInSpace2dEd_060504.zip

For several years, the veterans on Orbiter Forum have advised new orbinauts to download and read GPIS (as I will call it here). It has a wealth of material written in a light-hearted style, and organized in a logical progression of skills. The development of Orbiter has affected some of the details of the instructions, and these relatively minor differences can be confusing for those who need the most help. One of the goals of RSFA is to make updating GPIS to keep up with Orbiter's development a routine activity for the Orbiter community.

The major sections of GPIS are:

A note about updates: GPIS definitely needs some updating, and you’re welcome to participate. But please note that the words “I”, “me”, and “my” mostly refer to Bruce Irving, and it’s his personal, light, and engaging tone that helps make this such a great introduction to Orbiter. Try not to damage this aspect of the work as you help bring the technical bits up to date, and we’ll all be grateful to you.