This material was originally contributed by Bruce Irving from the 2nd edition of Go Play In Space. Refer to the page's View History tab to see subsequent changes.

I’m a great believer in the value of realistic controls for flight simulators, and I have spent some money and time over the years acquiring and configuring programmable joysticks, flight yokes, throttles, rudder pedals, and even a few game pads. These things can really make a difference in the realism of a flight sim (especially the rudder pedals). With extensive configurable features, whether defined within the sim’s own interface, or set up with a customizing utility provided with the joystick, you really can improve your effectiveness and “immersion” in the flight simulator world.

Orbiter provides some support for joysticks, but not nearly to this extent, and for the most part, it’s not nearly as important. There are a few basic configuration features on the Joystick tab of the Launchpad. Joystick use is briefly described in the Orbiter manual (chapter 7). It is most helpful and natural in atmospheric flight of airplane-like spacecraft like the Delta Glider (launch and landing) and the Space Shuttle (dead stick landing). But it is by no means essential – you can learn to control your spacecraft in the atmosphere or in space quite well using just the keyboard/keypad.

Orbiter itself has no joystick button programming or mapping features, but most higher-end joysticks include configuration utilities that allow you to assign keyboard sequences to joystick buttons and even in some cases to sliders and joystick control axes. Once programmed and activated, when you press a button on the stick, the stick software sends its programmed key sequence to Orbiter just as if you had typed it.

This can be useful for things like Kill Rotation (keypad 5), Toggle translation/rotation thruster mode (keypad /), and toggle internal/external view (F1). You can program all sorts of features if you have enough buttons and can remember what they do! People who have highly configurable sticks such as Saitek have reported that they can do almost all Orbiter operations (except perhaps MFD interactions) without touching the keypad once they have properly programmed their joystick.

Orbiter 2006 includes a fantastic tool called the Scenario Editor. It runs as a module within Orbiter, allowing you to modify a scenario as it is running. Note that you must start with a scenario that contains at least one spacecraft, but since you can easily add, modify, and delete spacecraft, it doesn’t really matter much which scenario you start with. Orbiter comes with a clear and complete PDF manual for the Scenario Editor, located in the \Docs folder of the Orbiter installation. The manual is only about 15 pages, of which the last three are for add-on developers, so it’s a quick and highly recommended read. We won’t duplicate that information here, but will instead start with some tips for use, followed by a quick example. Although the Scenario Editor is an easier and more intuitive option for most people, the .scn files are plain text and are structured pretty logically, so they are not that hard to modify with a text editor. But you can’t change a running scenario this way (text edit changes will apply the next time you launch the edited scenario). 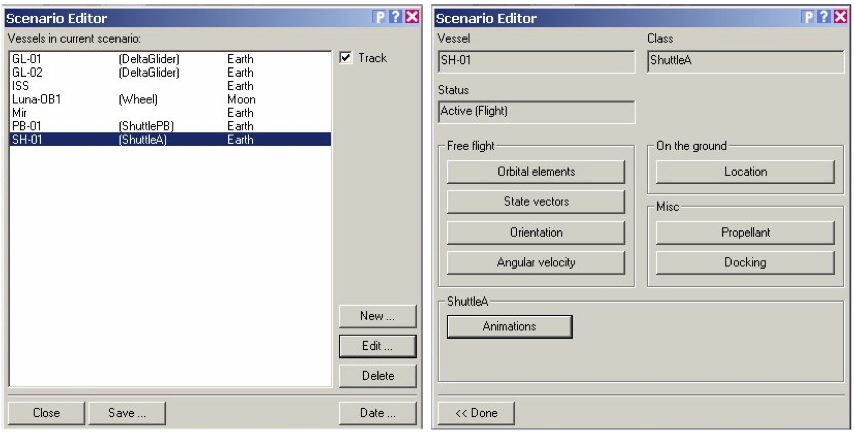 explanatory. Since the changes are generally applied to Orbiter as you work in the editor, closing without saving is not fatal, but this save is very handy in that it allows you to immediately supply the name, folder, and comments to be saved with the scenario. 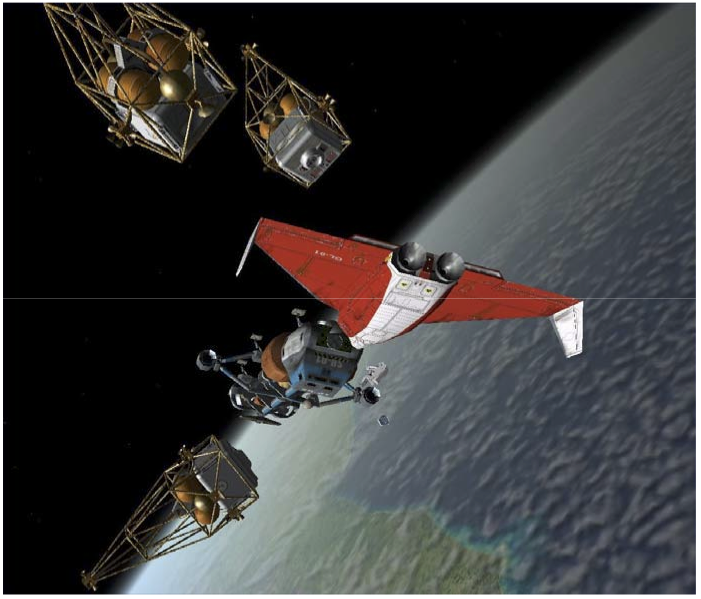 This is a pretty crazy application of the Scenario Editor, designed mainly to require use of most of its features. The view from the Dragonfly of the altered “Smack!” docking scenario is pretty cool, though. Up close and personal.

Close the scenario editor, and turn off the pause (Control-P). You may want to slow time to 0.1x with R so there is time to use     and     to get inside your new Dragonfly, go back to normal time T, and watch the brief spinning/docking show.

Delta-V – change of velocity; a measure of the energy required to perform an orbital maneuver or transfer

Eccentricity – Often symbolized by e, a value that expresses to what extent an elliptical path is elongated from a circle (e=0). At e=1, the path transitions to a parabola (open path), and for e values greater than one (e > 1), the path becomes a hyperbola (also an open path, not a closed orbit).

Ecliptic – The plane in which Earth orbits the Sun   Ellipse – A closed plane curve generated in such a way that the sums of its distances from the two fixed points (the foci) is constant.

Equator – An imaginary circle around a body which defines the boundary between the northern and southern hemispheres.

Geostationary – A geosynchronous orbit in which the spacecraft is constrained to a constant latitude.

Geosynchronous – A direct, circular, low inclination orbit about the Earth having a period of 23 hours 56 minutes 4 seconds.

Node – a point in an orbit at which it intersects a reference plane such as the equatorial plane, the ecliptic plane, or the orbital plane of another object

Orbit – the path of a body acted upon by the force of gravity; orbits can be closed or open – closed orbits are generally ellipses

Per- or peri- (prefix) – closest approach of an orbit, a prefix applied to specify the periapsis of an orbit around a specific planet or moon (perigee - Earth; periline or periselene - Earth’s Moon; perihelion - Sun, i.e., solar orbit; perijove - Jupiter)

Prograde – Orbit in which the spacecraft moves in the same direction as the planet rotates (see retrograde). Also refers to spacecraft orientation in the direction of orbital motion for orbital maneuvering purposes.   Rad (Orbit MFD) – Radial distance from the center of the planet RCS – Reaction Control System (thrusters)

Retrograde – Orbit in which the spacecraft moves in the opposite direction from the planet's rotation (see prograde). Also refers to spacecraft orientation opposite the direction of orbital motion for orbital maneuvering purposes.

Satellite – A body which orbits another, typically larger one (star, planet, moon). Can be natural (e.g., moon) or artificial (man made).

Zenith – The point on the celestial sphere directly above the observer. Opposite the nadir.