This page documents the travails and heartache necessary to get the MSVC++ 2005 Express Edition to compile Orbiter projects.

Go to the Microsoft download center and get the compiler. Alternatively, download ISO image, which can be mounted, or burned to CD for off-line installing.

Alternatively you can get Visual Studio 2008 Express edition, though it is not yet fully tested to be compatible with Orbiter. That can be downloaded here: MSDN Visual Studio Download Center

Tell the program you are agreeing to its pernicious license agreement, but do it with your fingers crossed.

Install the Graphical IDE, but not MSDN or SQL stuff.

Get Orbiter and the SDK

Get Orbiter and the OrbiterSDK from Orbitersim.com and unpack it.

For the latest version of Orbiter, 2006-P1, you need the following files:

For the older Orbiter 06 version, you need the following files:

For the older Orbiter 05 version, you need at least 4 files:

Unpack all these files into the same folder, in order. A good choice is C:\Orbiter. This document assumes you use this path, from now on.

When installing the patches, it will ask if it is ok to replace a file. Say yes to all.

Get the Windows SDK

You need the SDK to get windows.h and its associated files.

The latest version of the SDK (Microsoft Windows Server 2003 R2 Platform SDK) is available as Web Installer, as Full Download, and as ISO Image. The download of this version requires Windows Genuine Advantage validation.

NOTE: A new version of the SDK, that does NOT requre validation ( Windows SDK for Windows Server 2008 and .NET Framework 3.5) is now available. The Web Installer is located here

There is also an earlier version of the SDK (Windows Server 2003 SP1 Platform SDK) available, which does not require the validation, and is still perfectly adequate for our purpose: Web Installer, Full Download, and ISO Image.

Run the installer and uncheck everything but what is shown below. 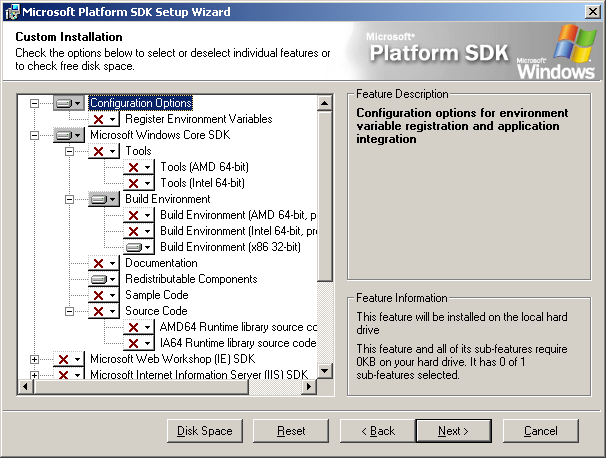 Setting up a project

We will modify the ShuttlePB project to work with the VC++2005. Start VC++, and open the project file OrbiterSDK\samples\ShuttlePB\ShuttlePB.dsw.

At the top, immediately under the menu bar, change the Configuration to Release.

Right click on the bold ShuttlePB in the left-hand tree. Select "Properties". Add the SDK include path for both the Platform SDK and the Orbiter SDK to the project include path. The Platform SDK installs itself by default to C:\Program Files\Microsoft Platform SDK so add the path C:\Program Files\Microsoft Platform SDK\Include. Orbiter can be installed anywhere, but if you unpacked it to C:\Orbiter, the correct path is C:\Orbiter\Orbitersdk\include. Or, you can have it be a relative path, like ..\..\include (This number of ..\ is correct for ShuttlePB, check for the right number for anyplace else) 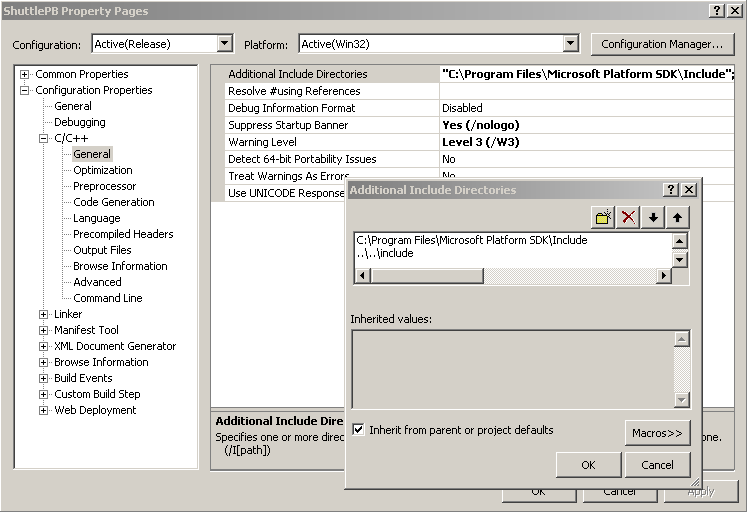 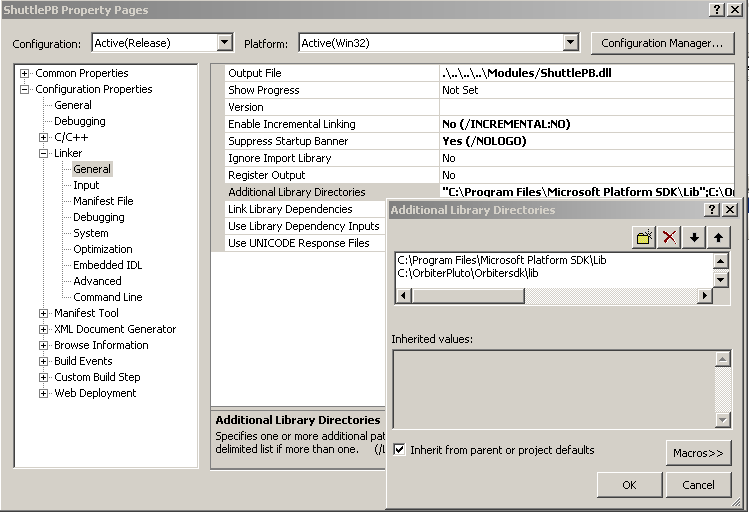 There are a few important changes between code for Visual C++ 2005 and earlier versions. Fortunately, only small modifications to the code are required to compensate for them.

First, load OrbiterAPI.h and change the reference to <fstream.h> to <fstream> so it will find the renamed header file correctly. This has actually been corrected in the most recent Orbiter Patch.

If you were to try to build the project after making that change, it would still fail on line 43 of ShuttlePB.cpp.

MSVC++ 2005 fixes a long-standing Visual C++ bug relating to the scope of variables defined in for() loops, and some code has previously relied on that bug to compile: worse than that, correct C++ code following the standard which defined a variable of the same name in two for() loops would not compile! In this case, simply change the function as shown:

Note that to allow backwards compatibility it's best to always define a for() loop variable outside the loop in this manner, even when no code tries to access the variable outside the loop. Otherwise, if, for example, you include two for() loops in the same function which both define int i as their loop variable, it will compile in VC++2005 but fail to compile in older versions.

There is an option in the project compiler settings window which changes this particular standard, but the code change makes the code clearer and more readable, and, more importantly, it's now correct C++ code according to the C++ standard.

Compiling a vessel requires the Windows SDK library's kernel32.lib,user32.lib and gdi32.lib. These are not linked by default, so you have to add them to the "Additional Dependencies" line.

If ODBC library is specified you may safely remove it from the link options on the "Additional Dependencies" line. Also, by default, the project tries to link against the library msvcirt.lib which is not included in the free VC++2005 download, or the SDK download. We can easily get rid of this also. Add this library to the "Ignore specific library" line.

Edit the project properties, and make the changes as shown below: 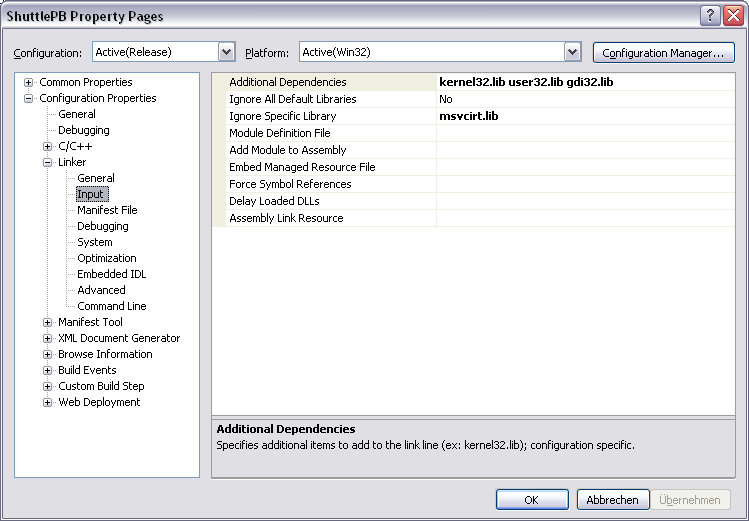 (Not required for the ShuttlePB example, ONLY REQUIRED FOR VC++ 2003 toolkit <, VC++ 2005 and VC++ 2008 express edition compilers can compile resources without problems)

VC++ 2003 toolkit doesn't support the compilation of resource files (.res) from source files (such as bitmaps .bmp). However, there is a command line resource compiler (rc.exe) which is installed when you install VC++ Express. The default location for this program is C:\Program Files\Microsoft Visual Studio 8\VC\Bin\rc.exe.

rc.exe takes as its input a resource description file (.rc) and emits a resource file (.res). Take the example of two bitmaps called panel.bmp and panelLight.bmp. In order to compile these resources create a .rc file which is effectively a text file describing the resources to compile. To compile the above example you would a text file with the following text and save it as a .rc file (in our case panels.rc).

then execute the following command:

The result is a new file (panels.res). In VC++ you can select to add an existing item and add the .res file to the solution. On next compilation the resource will be embedded in the resulting dll.

Note: In order to call rc from the directory where your files are you will need to add the location of rc to your path.

Use the menu option Build/Build ShuttlePB to compile. It should now compile cleanly, no errors or warnings. The DLL will be in C:\Orbiter\Modules\ShuttlePB.dll. If you are making an MFD or plugin, you will want those to compile into the C:\Orbiter\Modules\Plugin folder. If you go look up this module, it should have the current time, and be accompanied by a .exp and a .lib file, both of which have the current date on them. Load any scenario which uses ShuttlePB and fly it normally.

Microsoft Visual Studio includes a debugger that will enable you to debug your addon quickly and easily without resorting to oapiDebugString all the time.

Make sure when debugging that you have orbiter running windowed or on another screen to Visual Studio, otherwise you won't be able to see the debugger.

Press F5 to start the program and begin debugging.

Note: When running orbiter, if you exit back to the launchpad, then your module may become detached from Visual studio and not debug. You will either have to quit out of the launchpad entirely, or manually attach it to the orbiter process (Debug --> Attach to process...)

When addons are compiled under VC++ 2005 (VC 8.0) the resulting DLL implements a new component dependency model not present in any previous version of VC++. This model uses an embedded XML file to declare it's dependency to which VC library it uses. For DLL's compiled in VC++ 2005, this means the embedded XML points to MSVCR80.DLL and MSVCP80D.DLL. These two files are not included with "off-the-shelf" copies of Windows. Users of your addon must either have installed the Microsoft .NET 2.0 Framework or the Microsoft Visual C++ 2005 Redistributable Package.

If the user does not wish to install the full .NET 2.0 Framework, they can still use your addon by installing the Microsoft Visual C++ 2005 Redistributable Package which can be downloaded here for x86 (32-bit) and here for x64 (64-bit).

The instructions in this video, mentioned above, were tested and verified also with Visual C++ Express 2010, and everything works fine. One note, VC++2010 hides the build button per default, so one needs to activate expert mode (read here).

This article has a precis and appears in the Random addon or Random article section on the Main Page. The precis can be found at Free Compiler Setup/precis and is displayed below.